The end of July, which means it’s time for the second of Dave’s thrice-yearly kung fu camps near his home in leafy Kent. I make an effort to go to all of these, not only because they’re fun and the food is excellent, but also because there’s always shitloads to learn that Dave doesn’t have the time to teach in class.

I got up shortly after 5 a.m. as I had found a cheap ticket which would get me to Kent in plenty of time. The only downside was I couldn’t go on the train from London with the others, and I had to change twice, once at Redhill and again at Tonbridge. Still, I got there first, at 08:10, and shortly afterwards, Robert, one of my kung fu brothers, turned up in his car, readying himself to become a makeshift taxi service. (Local taxis near Dave’s place can be… How can I put this diplomatically? Temperamental, to say the least.) The others turned up not long after that and the shuttle service was employed.

We started, as usual, by warming up, and then spent the morning wielding long orange things. Long as in 6” foam staffs, specially designed so that, should any of us inadvertently hit someone, the damage would be minimal.

It was tremendous fun. Really. I hadn’t practised with a staff for a while, since Dave used to hold staff class on a Monday evening (it’s since been replaced with another patterns class).

As you can see from the above, much fun was had, and I managed to bruise my kneecap, as part of the practice was squatting down into a low stance. We practised both alone and later with partners, and there was lots of giggling going on as well as secret posturing (playing with a staff, no matter that it’s made of foam and couldn’t hurt a beetle in a blizzard, really is cool).

Mid morning was time for tea (or instant coffee – guess which I picked) and pastries, the latter of which came from Dave’s local bakery. They contain far too much sugar for normal functioning, but after half a morning’s training in the stifling heat, they’re perfect.

As the morning wore on, the staff moves we had to practise became more complex, and I’d like to think we all looked even cooler. However, only Dave would be able to verify (or ridicule) that, so I’ll leave you to imagine. I volunteered to help Stéphane prepare the salad in the kitchen (but left him to it as he chopped the celery… yuck), and then, it was lunchtime!!! 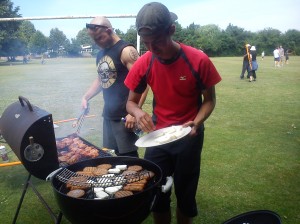 This is my kung fu brother Dolan, embarrassingly sorting out the vegetarian options, and Chris, dealing with the definitely-not-vegetarian options. The chicken was marinated in… um… marinade, which unfortunately didn’t react too well to being on the barbecue, and caught fire. Don’t believe me? Look: 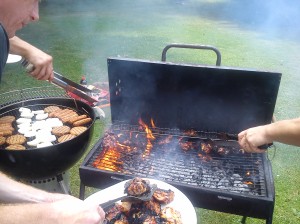 After a long speech about the importance of filial piety, we all ate some more (there really was a lot of food – no problem for the 50 or so hungry martial artists present) and then in the afternoon we did some breath work and practised San Zhan. Those who didn’t know it were taught it so that they could practise too, and then later, those of us who knew more had to practise our highest pattern. In my case, this was Si Men Dou Di, fifth pattern. Daniel asked if I would be grading on Sunday, to which I replied, ‘No. If I graded tomorrow, Dennis would either point and laugh—’ And before I had finished my sentence, Dave said, ‘Yep.’ So, that told me.

It rained for a while. No, scratch that. It threw it down for a while. Luckily, I had come prepared with a waterproof (bought in Scotland, so properly waterproof, thank you very much), but it didn’t last long, which was just as well, as it was still very hot, so people shed waterproofs and trained sleeveless in the rain rather than melt.

The sun came back out and we practised patterns for the rest of the afternoon, stopped briefly for more tea and pastries and then the rest of the day seemed to disappear in a heartbeat.

After camp, we went to the local pub to celebrate Dave’s success in China last month, but I couldn’t stay long as I had a train to catch. Dolan gave me and a couple of others a lift to the station, Robert took some others, and the camp was over for some of us.

There was a brief panic when my train was late and I thought I would miss my connection – I rang Dolan on the off-chance he could drop me at Tonbridge, but he was halfway back to the pub, then rang Dave to see if anyone could put me up in an emergency (he said he would do it, but it was best I got the train if I could) – but in the end, there was ample time to change at Tonbridge.

I always enjoy Dave’s camps. They’re a lot of fun, everyone learns heaps and leaves absolutely stuffed with food, and it’s a full day of nothing but kung fu. And that can only be a Good Thing.