For some time, now, we at Fujian White Crane kung fu club have been eagerly anticipating the publication of a book by instructor Danil Mikhailov, called The History and Philosophy of Kung fu: An Introduction. Earlier in the year, Dave asked me if I would do Danil the favour of proofreading it, a task I, of course, eagerly took on. It would, in fact, be an honour.

At one of Dennis’s camps, I spoke with Danil to discuss when I would proofread it and when he needed it to be done, and a time frame was established. In the summer, I met him in a coffee shop in Brighton to discuss progress and talk over any queries I had and, by the end of July, I had sent him the final edit of the book.

He was very excited to announce that he would be watching the first book roll off the printing machine in the autumn, and by October, a launch date was set. In the meantime, members of the club were paying in advance for their copies, with a discount, and this helped fund the initial print run.

On Saturday, 24th of November, the launch was held in the hall where Danil teaches, in Muswell Hill in north London. As editor and proofreader, I was one of a number of people who were invited specifically by Danil to attend both the launch and the pre-launch lecture. (Two other FWC students had helped with the cover art and cover design, and we were all invited.) Both of these events were open to the public, so I asked Laz if he would like to accompany me as my guest, and it meant so much to me that he was there.

We arrived just in time – we’d missed a bus in Brighton by a whisker and we were almost late, but thankfully, we got there with moments to spare. The lecture was about Daoism, one of the three main religions in China (along with Buddhism and Confucianism), a topic which is covered in great depth in Danil’s book. The book goes into minute detail about not the apocryphal legends that surround kung fu (the most famous of which is that it started when Bodhidharma visited the Shaolin Temple), but the hard facts about its origins, which leads me to believe that a lot of people will find it extremely controversial. But this is definitely a good thing. Everything that is in the book can be substantiated, as Danil has spent fifteen years researching and studying the topic, having spent time at SOAS, as well as visiting instructors and masters in China, looking at original documents. Several legends will be blown right out of the water and many masters of less traditional clubs than ours (i.e. most Western clubs) will be pissed off when they see he has absolutely whitewashed some of their most treasured legends by cutting through them and getting straight at the truth.

After questions, there was a short break and then Danil spoke again before once more opening to questions. After this, there was time for munchies and champagne before he sat behind a table and signed books for those who wished it. We joined the queue, and when it was my turn, he stood and went to get me a copy of the book, which he had promised as part of a generous thank you for my work on the text. He signed it, then signed a copy for Laz. Finally, we had our hands on the book! It was so exciting! 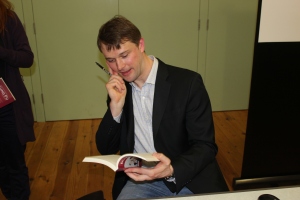 Danil contemplates his book, while I wait for him to sign my copy

Not long after that, people began to disperse, and a few of us left together. Then, it was just Kristina, Laz and me on the Tube at the end of a wonderful, if tiring, day.

Congratulations, Danil, on a marvellous book on an endlessly fascinating subject. It was truly an honour to have been so closely involved, and I look forward to the next volume. Xie xie. 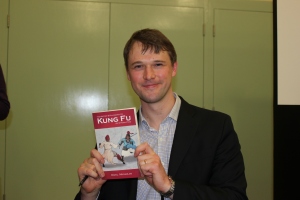 Details of how to buy your copy of the book can be found by clicking here.

For more information about Danil’s work, you can visit his website by clicking here.

Thanks to Jeremy Mathieu, who took the photos using Kristina’s camera.