Tonight I went to see Emily Smith play at the Ropetackle Arts Centre in Shoreham. I hadn’t seen Emily and her husband Jamie McClennan play for some time, because she’s not often in my neck of the woods, and she’s even less often here when I’m in a position to go and see her. So when I knew she was going to be just down the road, I went along.

I was a bit late, missing the first song, because the website said ‘Doors 8’, and the guy at the box office told me they’d be on about 8.15. Never mind. I only missed one, and I even heard some of it through the door, and I could see Emily up on stage on her own, singing unaccompanied (this turned out to be ‘What A Voice’ from latest album Traiveller’s Joy).

When I was let in to take my seat (I chose one near the front), the next song was ‘Sweet Lover of Mine’, a lively song about a woman who wants to get involved with a man but lays down some ground rules first. Smart lady. 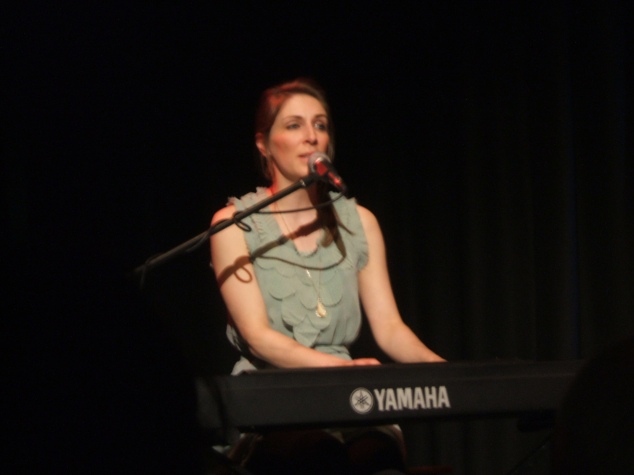 I shan’t go into all the songs here, as I’m going to show you the set list later on. Instead, I’ll tell you what it was like for me to be there. Last time I saw Emily and Jamie, it was at Chichester Festival Theatre, but that was a while ago and it was good to see them both again.

During the break, I introduced myself to the first face I saw, their guitarist and whistle player Matheu Watson, who I’d not met before, and he said the others would be out shortly. Emily stayed backstage, but Jamie came out, I grabbed him for a hug and a hello-it’s-been-ages kiss, and he set up to flog a few CDs. Which is where temptation got the better of me. I was going to buy just one, tonight (the aforementioned Traiveller’s Joy), but the album the pair of them did in 2009 to celebrate the 250th anniversary of the birth of Robert Burns, Adoon Winding Nith, was also there, and I’d been meaning to get my hands on a copy for ages. I saw this as the perfect opportunity to buy both, as the money would go direct to them, rather than being siphoned off by a distributer, and I’m always happier to do that. Jamie made the mistake of leaving his glass of red wine within easy reach, so I grabbed it and helped myself. This is what I do when I know the band performing, and I’ve known Emily and Jamie since I was writing for a website called RootsReview and the editor sent me a copy of Emily’s debut album. She won BBC Radio Scotland’s Young Traditional Music of the Year Award in 2002, aged 21, and for good reason. She has an incredible voice that I fell instantly in love with. Anyway, my point is, I’ve known them for years, so I had no qualms about stealing Jamie’s wine.

Another blinding set of songs for the second half, and Emily chatted easily with the audience, often introducing the songs by telling the stories behind them. A selection of their own songs mingled beautifully with traditional Scottish ballads, mostly from Emily’s home region of Dumfries and Galloway, and of course there had to be some Burns songs in there, too.

One song they did, making an initial fluff-up at the beginning as it’s new to them, was ‘Twa Sisters’. I know this song very well. I’ve heard it done by several different bands, namely Clannad, Steeleye Span (as ‘Three Sisters’) and Mary Jane. It’s a ‘cheery murder ballad’, about a jealous maid who resents her younger sister getting attention from a boy, so she pushes her in the river. A man comes along and steals the ring off the dead girl’s finger, and pushes her in again – and he’s the one to hang. Delightful, I’m sure you’ll agree, and typical of the doom and gloom of many folk songs. And, naturally, often my favourite type. Emily’s sweet, clear voice made it extra ‘cheery’, of course, which cleverly disguised its dark undertones.

Near the end, Emily sat down at the keyboard, and Jamie and Matheu ‘let rip’, as she put it. She didn’t sing – folk tunes are not accompanied by vocals – and Jamie proved himself once again as one of the best fiddle players of our generation. He played like an absolute demon.

All in all, the band were on top form, Emily was in fine voice and she charmed the audience. A few stayed behind to get CDs signed, including yours truly (and when I asked, Emily said I could go to the stage and help myself to a set list, so I did). I asked about the medley they had played, and said to Jamie, ‘Could you…?’ ‘I don’t know the names of the tunes,’ he said, anticipating what I wanted. Bugger. Musicians… The one I wanted the name of was, Emily told me, a Fred Morrison tune, and I know I’ve heard it before but can’t think where. This is one of the perils of listening to lots of folk music. Lots of musicians play the same songs and tunes, and then you can’t remember where you heard something.

I stayed after everyone else had gone for a very brief catch-up before they needed to pack up. It was a great night, very chilled out, and it was lovely to see Emily and Jamie again.

As an illustration of what it’s like trying to review a gig with only one set list, here is Matheu’s:

And then I went back for Emily’s: 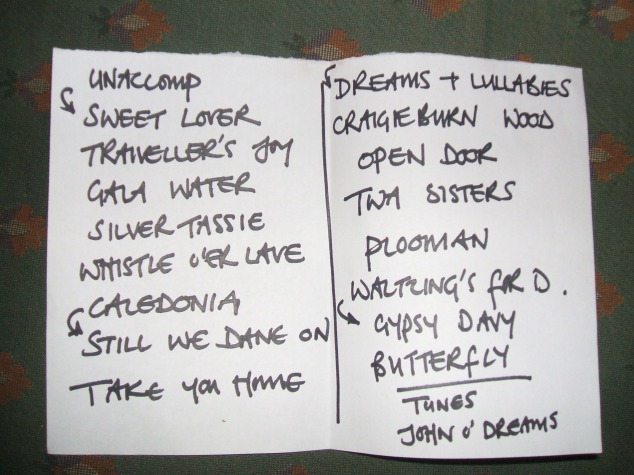 Not hard to see which one I can understand 🙂